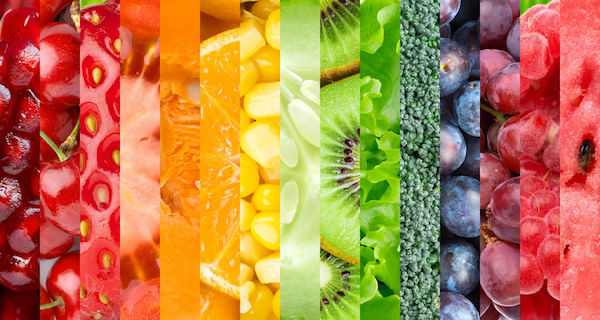 Every day, we are surrounded by the full spectrum of colors:the bright red of the stop sign on our way to work; the glowing orange-yellow sunlight shining through our window; the sea of swaying green grass in the local park; the dark indigo skin of succulent blueberries and blackberries.

While we might stop and take a moment to appreciate the beauty of these colors, we often don’t think about the powerful effects that seeing and eating different colors have on our physical health and emotional well-being.

Color therapy has been long used in the healing arts, but it’s only been recently that studies are emerging indicating the effects that the colors have on our mood, energy, and health. The conclusions from these studies allow you to harness the power of color in your own life. Here are some color-full findings to encourage you to experiment with colors both on and off your plate:

If you find yourself in a mid-day slump, try switching to a red light or a room with red walls. A 2014 article published in the Conference Proceedings of the Engineering in Medicine and Biology Society found that when participants were put in a room with red light, they had a higher level of brain activity associated with “alertness, agitation, mental activity, and general activation of mind and body functions.” They also were more likely to feel “vigor.” 1

Orange foods, like carrots and sweet potatoes, get their color from carotenoids like beta-carotene, which may play an important role in reproduction. An area of animal research indicates that beta-carotene concentrates in the corpus luteum (a developing egg in the ovary), where it plays a role in ovulation by assisting with the production of progesterone. 2 Animal studies likewise suggest that beta-carotene supplementation supports ovarian activity and progesterone synthesis in goats 3 4

Polish scientists have discovered that uterine tissues contain beta-carotene 5 , while a 2014 study published in the journal Fertility and Sterility suggests that when women boost their beta-carotene intake, their chances of becoming pregnant seem to improve. 6

Yellow is a curious color. It seems to be the color that most people are drawn to, and the one that is most correlated with a normal mood, according to researchers at the University of Manchester. 7 The yellow-colored pigment, lutein, is known to collect in certain tissues of the body, specifically the macula, as well as the skin and in breast tissue. There are several studies that show that healthy yellow foods, like slow-burning carbohydrates, generate energy. A study conducted in Oxford, England, found that yellow mustard bran helped a group of young, active men have a better post-meal response to glucose after eating potato and leek soup compared to eating the soup by itself. 8 Likewise, a Canadian study found that whole yellow pea flour— a complex carbohydrate— helped overweight people improve their use of insulin. 9

Researchers have discovered some fascinating links associating the color green with the heart. For example, an Austrian experiment found that exposing people to green fluorescent light seemed to have a soothing effect on their hearts, affecting heart rate variability (HRV). 10 People who endure continual worry and anxiety seem to have decreased HRV, which is also associated with a number of disorders, including congestive heart failure and depression. If exposure to green light increases HRV, we can imagine that has heart-protective effects and might help to heal grief. Moreover, if green light changes vasculature, then it stands to reason that other conditions involving the vasculature would be impacted by it. In support of this concept, a study was just published indicating that migraine severity is reduced in the presence of green light. 11

The color blue has powerful effects on the brain and memory. A 2008 British study found that exposing workers to blue-enriched white light improved self-reported alertness, performance, and sleep quality. 12 Similarly, an Australian experiment discovered that exposure to blue light made experimental subjects less sleepy as they tried to complete prolonged tasks during the night. 13 A recent study published in May 2016 showed that people performed better on a working memory task and had greater activation in the prefrontal regions of the brain after being in a blue-lit room for thirty minutes compared with being in a room with amber light. 14

The color white has been the focus of promising research about depression. In 2011, Dutch psychiatric researchers found that both blue-enriched white light and bright white light might possibly be effective in treating SAD. 15 Furthermore, a 2004 Danish study affirmed that bright light could perhaps be a helpful treatment even in non-seasonal depression when used in conjunction with antidepressants. 16 A University of California, San Diego study also found that bright light therapy combined with antidepressants and “wake therapy” could be effective in treating depression. 17

White light may also be part of the fruit and vegetables that we eat. A recent study found that extracts from pomegranate and turmeric emitted almost pure white light emission. 18 The researchers discovered that light was mostly emitting from the active ingredients in the foods – polyphenols and anthocyanins in pomegranate, and curcumin in turmeric. If white light can have a healing effect outside the body, think about the potential of eating white light-emitting foods!

As you can see, color offers so much more than visual beauty. By eating a spectrum of naturally-occurring colors, and infusing colors in our surroundings, we can truly harness the power of the rainbow to guide ourselves to full-spectrum health.

For more information regarding colorful foods, please visit the following links to the GreenMedInfo database:

Dr. Deanna Minich is a wellness and lifestyle medicine expert who integrates ancient healing traditions with modern science. Her unique “whole self” approach to nutrition looks at physiology, psychology, eating, and living within what she calls the “7 Systems of Health.” Founder ofFood & Spirit, she also leads online detox programs. Her latest book is Whole Detox: A 21-Day Personalized Program to Break Through Barriers in Every Area of Your Life