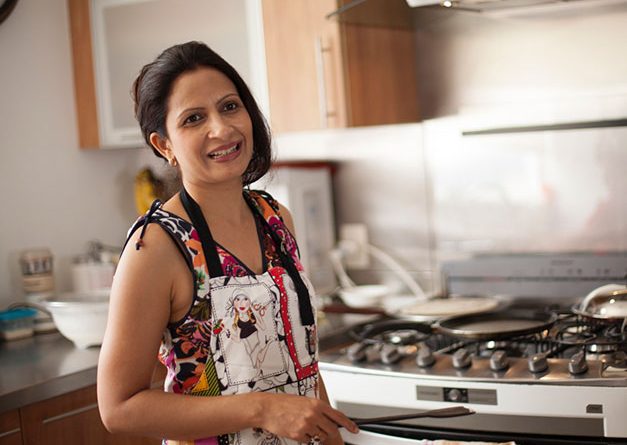 Whenever some visitors asked my elder sister “do you work” she used to be amused. She used to say “what else I do from 5am to 10 pm every day”. For most people household work is not considered as “work”. It is not included in computing National income or GDP. National income by definition is aggregate of Products and services produced in a country during the year. But household work is not included in the services. In other words only paid services are included. For instance if you marry your servant maid then the national income will come down. Believe me!

I had most sagacious and wise Prof Moni Mukherjee as my National Income paper—teacher in my Post Graduation at Indian Statistical Institute Calcutta. I was curious and gathered courage [in those days you don’t meet Professors in the “staff room” and ask questions!] and asked him about this issue. He mentioned to me that the “Euro-Centric world view regarding un-paid household work is accepted as the “given wisdom” and followed by all the Economists and Economies” .This means that bringing up children/cooking/keeping house in order and taking care of home economy are not considered as “ productive”. When you investigate further you find that it is related to the “idea of women” as propagated by the Abrahamic faiths primarily Islam—who call themselves as “Religion of Peace”–RoP- and Christianity who call themselves as “Religion of Love”-RoL.

Unfortunately neither of these faiths—which rules more than half of the world—accepted woman as equal or “productive”. Christianity for centuries did not recognize women have “soul” and Islam treated them as a protective “meat”.
So one of the important premise was to do –de-legitimize” their contribution to the world at large more so in the sphere of Economics and computation of National Income. So to earn legitimacy they must join the “workforce”. In the initial period of Crusades/Jehadis many of them were needed as nurses to tender to the injured and so nursing as a profession was “glorified” by men. Florence of Nightingale became symbol of “highest form of sacrifice—more so Productivity” In the earlier stages of Industrialization and Corporate developments large number of women were needed as blue color workers and also as typists/coffeemakers in office and as assistants.
So –office work began to be encouraged and household work undermined. Also efforts made to reduce household work from time and efforts point of view by new gadgets like cooker etc. Still women were not given any position of importance in the outside

Still women were not given any position of importance in the outside work place. And so they were encouraged to “break Glass ceilings” to get into higher positions in workforce. Slowly advertisements/TV serials/Cinemas began to talk of ‘burden of family” children are burden/encumbrances” at the same time Children are needed by the society and so “super Mom’s” created by the business and media to make women work at home as well as office. Women are encouraged to more and more be active in “office work” and they are encouraged to demand equal pay for equal work—instead of recognizing massive work at home. Their “worth” is proved only if they perform the Acts of men” whether it is combatants role in Army or it is Speed car racing. They are permanently made to feel inferior by these “tricks”. Hence a huge mass of “Feminists” have been developed by business and corporate men to compete with men and prove their worth. Women unfortunately have fallen into this new trap to “prove” themselves.
Corporate business has also made society into “Sex centric” from family Centric since Societies which are family centric “respect” women in the household as mother/grandmother/mother in law etc. But modern business do not want a society which “respect” women but a society where “women “are craving for rights and which are thrown as crumbs by men. The arrival of Marx and communism re-enforced this stereo type of women in military /women in factories and offices as “progressive” and women at home as “backward”.
Not only that, most of these “developed” countries gave their women voting rights after much agitations and some like Switzerland as late as 1971 in their federal elections. Unfortunately instead of questioning this whole hypothesis and premise women fell for the single largest trick of men in making them feel that they are worthies only if they ape men in dress/food/ aggression and “office work”J
Post contraceptive revolution they are told that they can be more active in paid work place since Child birth is now a choice. Instead of burning women in stalks by calling them witches the modern business burns them in office by asking to “perform” /excel and show results along with unaccounted household work.
The fundamental point that household work is not treated as “productive service” was never discussed since all “renowned Economists” were men. Colonized countries like India also adopted the same route since colonizers wanted to create a mirror image of their civilization on the “unwashed” in terms of culture/language/economics etc. Hence we never count million women hours spent by women in cooking/fetching water/bringing up children etc. That is totally lost. In a pioneering work “GDP and the Value of Family Caretaking: How Much Does Europe Care? Gianna C. Giannelli University of Florence et all [Discussion Paper No. 5046 July 2010 IZA– Forschungsinstitut zur Zukunft der Arbeit Institute for the Study of Labor] estimates that for Europe as a whole, the total value of these activities ranges between 20.1 per cent and 36.8 per cent of the EU GDP, depending on the applied methodology. It is all the more shameful for a country like ours where major Gods are women and important things in life like Education/Wealth and Valor are given as boons only by women Gods. WE pray to Lakshmi for wealth /pray to Saraswathi for Education/knowledge/pray to Durga [Parvathi] for valor or power. Actually most men Gods can’t offer many of these worldly thingsJ .Not only that—most of the names of male gods is Pre-fixed with the name of his wife { not suffixedJ] like Sita Raman or Radha Krishnan

We are one of the few living civilizations who recognized the contribution of Women Rishis like Gargi who questioned Sage Yajnavalkya.
We are essentially a “women centric civilization” and predominantly our economy can be called “Feminine Economics” unlike that of Europe and Middle East which are “Masculine Economics”. Masculine economies are destructive and anti-woman while as feminine Economies are nature and animal friendly and preserving by its design. Feminine economics is inclusive /collaborative and Cooperative. Masculine of the Abrahamic faiths are competitive as in war and exclusive and violent in nature.
In the last several centuries trillions of dollars of household work undertaken by women were not counted and it continues even today. In the context of the decline of the west and slow eclipse of Euro Centric view of the world—it is required for countries like India to re-think some of these basic things imposed by colonialism. Even if we take Housework to be same as the “measured work” in an economy like ours –we will find that our GDP is at least twice as big as it is currently counted.
Time has come for ancient but living non-Abrahamic civilizations like India to recognize the services of its women /recount and make a new world order. As a beginning Government can ask some its eminent “internationally known/recognised” economists to estimate the trillions of dollars of uncounted services provided by housewives sorry home makers in India. Somewhere we need to start.

By: R.VAIDYANATHAN  | PROFESSOR OF FINANCE  | INDIAN INSTITUTE OF MANAGEMENT